“It is something I wanted to do and I’m finally doing it. I am helping and making a difference,” Shenell Williams, 2014 Medical Assistant Program graduate, reflected on her MA experience during a celebration on Wednesday, August 23. 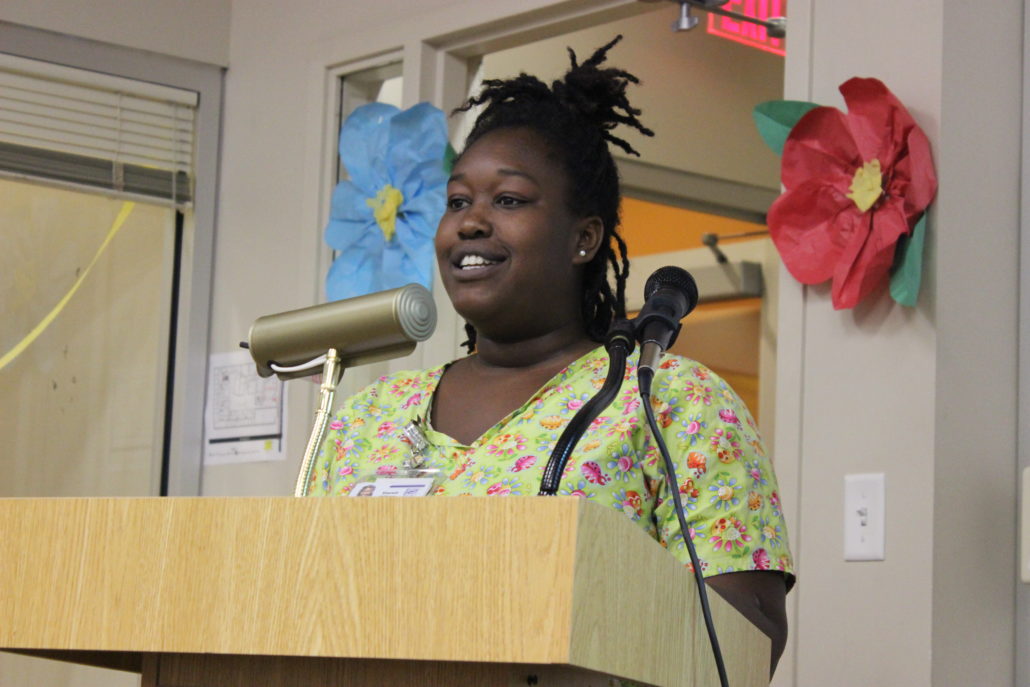 Proud family and friends gathered together to celebrate the induction of the fifth class of students into Briya’s Medical Assistant Program. Christie McKay, Briya’s Executive Director, welcomed the 28 students and spoke about how proud she is of this program, its students, and its growth.

Koppelman praised the work of those graduates, stating, “They are hard-working, intelligent, empathetic, and just all-around wonderful staff members.”

Stressing the importance of the students’ work, Koppelman highlighted their career path. “You are all about to start, or perhaps continue on, a journey to be in the most important career path there is, healthcare,” she said. Further highlighting the significance, she went on to share that healthcare “touches everyone, regardless of their race, ethnicity, age, gender, socioeconomic, immigration, or insurance status.”

Williams, the first MA from Briya’s program to be hired by Mary’s Center, then enthusiastically addressed the new students and shared her story of her journey through the program.

Williams shared that for her, Briya’s MA program provided a second chance, and when she found out she was accepted into the program, “it brought tears to [her] eyes and joy to [her] heart.” She continued to tell students to prepare to work hard, as she often found herself staying late for tutoring.

She expressed her gratitude for the staff who supported her every step of the way and happily laughed as she admitted that when she finally took the national Registered Medical Assistant exam, it was much easier than she had expected.

After all three speakers, students were then handed certificates of scholarship and received their MA pins. Instructors and former students pinned them on as family and community members cheered in support.

In the past three years of Briya’s Medical Assistant program, every student who has taken the nationally recognized exam to become a registered MA has passed. This statistic truly captures the strength of this exceptional program, made possible through Briya’s longstanding partnership with Mary’s Center and the dedication of students and staff.